There is good access to public transport (Tram, Bus and Metro). Walk a couple of minutes from Raday Utca to the Danube and you can take the number 2 Tram which takes you on the most picturesque Tram route in the city along the banks of the Danube, you will see the magnificent Castle district on the hill overlooking Pest and the stunning Parliament building. From the Grand Boulevard (Nagykorut - the Ferenc Korut or Jozsef Korut section - see map below) take the number 4 Tram up to the Octogon which connects with the world heritage site Andrassy Utca with the Opera House, Terror Museum, Hero Square and the Szechenyi baths, City Park, Fair and Circus at the top. The main West end shopping centre is a short walk or a couple of Tram stops further on from the Octogon. Liszt Ferenc Ter another great spot for alfresco cafťs and restaurants is just around the corner from the Octogon. The Metro system can be accessed from Kalvin Ter at the top of Raday Utca a five minute walk away. 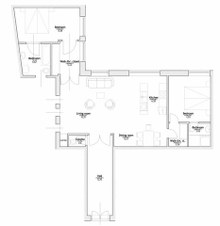 December 2022
View availability for this property in all coming months